If you are new to the 3D printing world, well, you should start with the basics, because having good knowledge will benefit you in the long run. See, if you don’t learn the basics, there is a chance you might ruin your 3D printer. The basics of 3D start with its axes. Many people have learned about axes in their high school but might require a brush-up and that’s what we will do here.

Many people know that we live in a three-dimensional world so each dimension is represented by one axis. That’s why there are three axes, namely X, Y, and Z it’s as simple as that. Therefore, for plotting a point in the real world i.e. 3D printing, you will require these three axes.

In this article, we will discuss the 3 axes in detail and know different types of printers and how they use them. Hence, keep reading till the end. 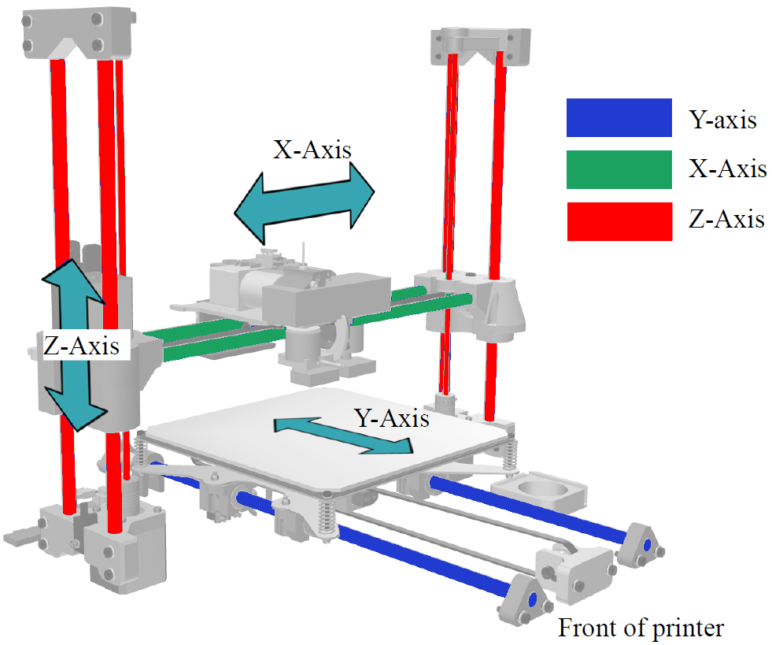 Generally, there are two types of printers, Cartesian and Polar ones. Out of these two, Cartesian is well known, and there are many subtypes to it. While polar doesn’t have any subtype.

The polar 3D printers work on only two Cartesian coordinates i.e. one plane, while it uses an angle dimension to raise the printing head for the desired height. Even if they are not as popular as Cartesian printers, they are unique and accurate too. Hence people who love their unique working and circular design get them but they are quite rare.

Many people get confused between Cartesian and rectilinear. However, rectilinear is a subtype of Cartesian. It is a specific term that explains the working of a printer. The term exactly means moving in straight lines, and that’s what the nozzle of these printers does. Here are the two popular rectilinear 3D printers.

The Core XY 3D printers have intricate working and should be left for the professionals. It uses two motors, pulleys, and belts, which are enclosed in a cube. These 3D printers are highly accurate and can print delicate 3D prints easily. Also, you can get a core XY 3D printer at a fairly decent price range.

The H-bot 3D printers are often mixed with core XY because they look exactly the same. However, there are some differences in their construction, such as an H-bot printer has only one timing belt, whereas a Core XY printer has two. Even if it seems petty, due to the absence of one belt, the resultant print differs a lot in accuracy and vibrations. Hence, H-bot printers are not too popular.

The delta 3D printers are the most preferred ones when it comes to professional work. However, they don’t use the Cartesian coordinates. They have a unique build comprising three arms that control the nozzle. Each of the vertical arms doesn’t rely on the Cartesian coordinates. Furthermore, the nozzle of these printers can move quickly, thus printing your object within less time. Also, the accuracy is better due to low weight and low vibrations.

SCARA is a well-known 3D printer type that prints using robotic arms. The name SCARA is an abbreviation for ‘selective compliance articulated robot arm’ that also suggests it has something to do with a robot arm. In these 3D printers, the printing bed moves along the Z axis while the robotic arms print in the XY plane. It has a unique build and takes up smaller space. Even while having a good speed and compact build, SCARA is not as popular as other 3D printers. Hence, you might get much community support, and the spare parts will be rare.

These different 3D printers can work well for distinct works and levels of printing. Many use the Cartesian while some don’t. However, through one or other means, they all use the same principle and print the objects. In this article, we mentioned the most popular as well as finely working 3D printer configurations and explained the 3D printer axes. Hence, we hope that you have understood the importance of these basic axes and Cartesian coordinates.

Hey, this is Emily here. I created this website to offer you a huge assortment of printers. Since I have been working as an office assistant for more than five years, I got the opportunity to handle multiple brand printers in my office. So I dived deep and learned more about printers and their work. So Best printers guide will be the destination for all your printer-related queries.